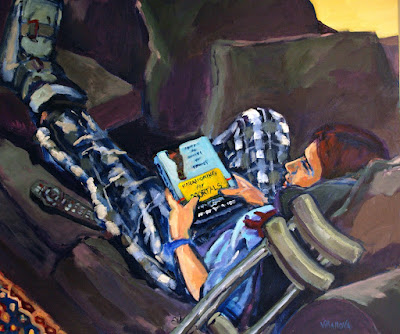 I'm glad to report that my daughter really is on the mend after breaking her foot in February. Yesterday was her first full day without crutches. She is most disappointed because she had raised money for a charity foundation to get a number for the Boston Marathon and she will now not be able to run because the race is next week. She was so disappointed because her number cannot be deferred to next year's race, however, she will be able to run in the Marine Corps Marathon in the fall which is a good race. (I did it in 2007 and it a fantastic race). She still has Boston in her blood though and will try again at some later time. This painting got into a juried figure show scheduled to open at the end of this week.
Posted by Paula Villanova at 6:34 AM

I'm glad she's on the mend. I love the way you documented her convalescence even though it was double difficult not running for her charity. So she's a little jockette like her mom!

I hope your daughter is feeling better... there's always next year! Great painting.

This is wonderful, and so is the news that she is much better.

I'm so glad your daughter is feeling better. I ran a couple of marathons and know first hand about the desire to run! There's always another year!!
Congrats about getting this painting into the juried show... it's beautiful!

Great painting Paula, but how disappointing for your daughter. I'll bet that she eventually will find her way to Boston.

So glad on all counts...
The running will come when she's totally healed!! The good news is she can look forward to another year!

The dynamic cropping/composition of this, and the colors in the sofa -- three big thumbs up. I also love those touches of bright color here and there -- really nice zings. Paint something bad why don'tcha; just be human, c'mon! j/k :0)
I ran one marathon in 2007 (Austin) and haven't done it since. Kudos to your daughter!

Hi, Paula. This is a fantastic painting. I love the unique composition. Sorry to hear about the marathon, but glad your daughter's mending.

Hi Paula - this is another wonderful painting - congratulations on getting into the show! glad to hear she is healing.....

wow, this is amazing! What a great perspective!

The Figure Show? At NRAS? Congratulaitons - it was a tough one to get into! The is great of Nina, and I'm thrilled she's really doing well.

Love this composition.
Just a heads up...I tried to follow you and it won't let me. wwwahhhhhh. I'll be back to try again.

Hey thanks everyone for your kind comments! My daughter is definitely disappointed because Boston is the big daddy of the marathons but she will definitely be back...

Gwen, welcome to my blog and I'm sorry that you were not able to follow my blog. I have been having some issues with Blogger lately (6 followers dropped off in one day a couple of months ago) and the counter for visitors seemed to stop working...I need to figure out how to contact them. Thanks for the feedback!

Very nice painting, I can feel her snuggled into the couch. Glad she is feeling better.

Hi Paula,
Thank you for following my blog "My Art - My Stories". And now I'm following you too (I didn't see any trouble to follow you)
I love this painting of your daughter. My favorite part? - the remote control - you really captured it! I always enjoy finding a familiar object in a painting. Maybe that's why I never get tired of still life painting. I've been working on one past four days, and you can see it on my blog as it evolves through different stages. I think I'll wrap it up tomorrow.
Sorry that your daughter wouldn't be able to run this time. But hey, this painting got you to a juried show! Congrats!

This is a fab painting Paula, a typical teenager with her remote control. I like the composition looking down from above. Hope she gets running again very soon.

So sorry to hear about your daughter's foot and missing out on the race!

Great painting...congrats on getting it into the show!

Gosh that's a great painting and glad to read she is on the mend. What a disappointment to miss the marathon.

Thanks Rhonda, Peter (welcome!), Carolann, Michelle, and Sandy! Peter...funny you should mention the remote control. When I was painting it, I wanted to be sure it would be recognizable so I'm glad that it was! Marathon update: I brought my daughter into the expo today in Boston to at least get her number even though she can't use it. I took her picture holding it (while on her crutches) at the finish line. Fortunately, she doesn't need the crutches anymore for short walks, but since she still uses them for long walks, I thought she may want to have that picture later in life!

I got back to your blog and this picture hit me right in the gut. My daughter is finally recovering from knee surgury (broken, dislocated and torn tendons) and had to put her favorite activity (dance) on hold since September. This week we go to our last doctor's appointment I hope. Your picture could have been her, sitting on the couch, crutches by her side. It's an emotional painting. Thank you for sharing.

Liza, thanks for visiting my blog! I'm so sorry about your daughter's injury, that must have been doubly painful to deal with the physical pain plus the agony of missing dance. The upside is that her youthfulness should ensure a reasonably quick and full recovery and she will, I hope, be able to dance, dance, dance again soon!

Wonderful painting Paula and so glad to hear your daughter is on the mend! Congratulations on getting juried in! 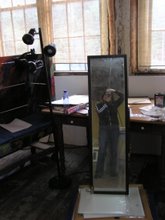